It’s that time of year for the annual Coachella Valley Music and Arts Festival!  The festival features two consecutive weekends of music held in Indio, California.  One of the great things about Coachella is the opportunity to see some of your favorite vets perform as well as new and up-and-coming acts from diverse musical backgrounds! Catch a few of my fave Coachella highlights below:

Solange Knowles, affectionately known as Solo by her fans, covered Erykah Badu’s “Bag Lady” during her set at Coachella.  She then performed some of her own tunes, including Sandcastle Disco (one of my faves from her) and her latest single “Losing You.”  The biggest surprise of the night was when her big sis Bey took the stage alongside her!  Looking like a scene straight from one of Solo’s music vids, Bey popped up and the twosome danced in sync to “Losing You.”

Peep the vid below: 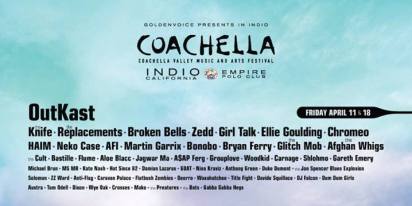 (Weekend 2 at the Coachella Festival)

Andre 3000 and Big Boi of the critically acclaimed Southern Hip-Hop group, OutKast reunited on stage for the first time in seven years at Coachella! They were the headliners during the first weekend and the duo performed again this past Friday.  During the first show, they performed 27 songs and was joined onstage by Janelle Monáe and Future. After mixed reviews from the initial comeback performance at the festival, they revamped their production and performance issues for their set on Friday and received more praise from festival attendees this time around.

Vid below from the first performance: