Troy Carter is the manager of who is widely considered to be today’s biggest superstar – Lady Gaga. After reading a case study about his management techniques and marketing strategy for Gaga, it was apparent to me that her stratospheric success was not a matter of random timing. It was all part of Carter’s long term strategy to bring her success at the right moment. I believe his best qualities as a manager are patience and long-term thinking.

Lady Gaga has always been a star; however, the way she was brought out, cultivated, and presented to the public did not happen overnight. Carter knew that for her to be successful and not written off as a weird new alternative act, he would have to grow her audience of superfans before thrusting her out into the public eye. Gaga’s performance abilities were always good, and I believe she could have been playing arenas and stadiums far sooner than she did, but Carter had a different plan. He kept her in clubs and venues of that nature so that she could connect more closely with her audience. He also kept her in many gay venues, because he knew that was where her most dedicated fans would lie and that she would eventually be a huge gay icon.

Another trait that Carter shares with other super managers (such as Scooter Braun) is that he realizes that his artist is unique, and he is not going to make decisions that imitate that of another artist. Lady Gaga’s brand partnerships and endorsements, for example, have all been for original products BY Lady Gaga – makeup, earphones, you name it. She has partnered with these companies and made her own products as opposed to endorsing previously created products, and this helped solidify her unique image. Carter’s eye for this is very keen. He does not seek out deals for her that will result in money only. He seeks out deals that will keep her image steady as well as her pocketbook. On that note, he also strays away from deals that would harm her image but greatly increase her financial flow. When Target wanted to partner with Gaga and Carter found out they funded anti-homosexual campaigns, he pulled out. Yes, it would have been a great financial decision in the short run, but she would have lost a TON of her fans, and it is likely she never would have recovered from that.

It’s obvious that Troy Carter is not the sole reason for Gaga’s success. In fact, it can be argued that she is more responsible for her success than he is. However, he has always been a very sound advisor to her, and it is his patience and long-term vision that have cultivated her success and put her on the career path she has traveled down thus far.

Scooter Braun is probably one of the most talked about managers of the past 5 years. He manages Justin Bieber, along with other well-known artists such as Asher Roth and The Wanted. He started out working as an event planner during his college years in Atlanta, and then eventually moved his way up and worked as a marketing manager for Jermaine Dupri. Now, years later, we know him as the man who discovered Justin Bieber.

What makes Scooter Braun a super manager is not the level of Bieber’s success; rather, it is how he has handled Justin’s image along the way. Braun is widely considered a marketing genius for his days under Jermaine Dupri and his nationally-renowned events that he planned in college, including parties for Eminem and Britney Spears. I believe this experience has helped him manage Bieber’s career. His philosophies are interesting as well. He does not take much credit for where Bieber is now. “Justin Bieber is where he is today because he is Justin Bieber; what you see is what you get. I can’t take credit for that.” His strategy when it comes to branding is exemplary as well. He lets the brand be itself and brings out its strengths. He does not try to make Bieber’s brand what it is not or follow in the exact footsteps of earlier superstars. He emulates rather than imitates. Braun and Bieber look at Michael Jackson’s career much of the time to see what it was that made his music sell so well. Along with it just being good music, he did something different than most child stars do today. He did not try to make new, provocative music to bring in adult fans; rather, he made music that kept his current child fans while bringing in new adult fans at the same time. Braun tries to do this with Bieber as well.

Another strong point in Braun’s managing technique is how he sees marketing opportunities. He realizes that Justin’s biggest advertisements are his fans; therefore, he uses this to their advantage. He has canceled interviews with major publications so that Justin can have an interview with a 15-year old girl who runs a Bieber fan page on Twitter. Decisions like these reiterate to fans that they really are important to Bieber, and it is great from both a marketing and a management standpoint.

Lastly, and perhaps most important – Braun does not treat Bieber as a means to an end. He doesn’t see him as just a 15% commission. He really cares about Bieber’s life and career choices, and does not just tell him what he wants to hear. This is imperative in a world and industry where you are surrounded by people just feeding you what you want to hear in hopes that they will get something out of it. I believe that Braun is one of the greatest managers in our industry today, if not THE greatest manager of today. 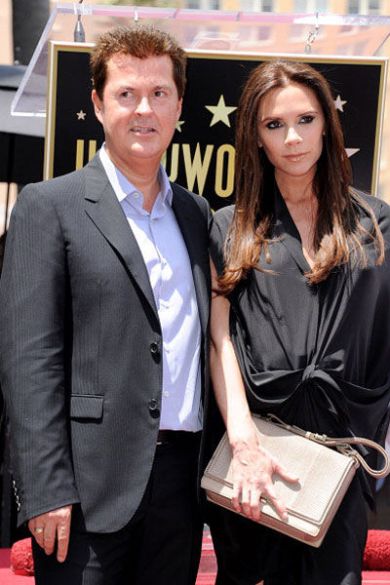 Simon Fuller is widely considered to be a more influential and powerful artist manager than Brian Epstein (who was the driving force behind the success of the Beatles,) which tells you quite enough. His claim to fame is his management of the Spice Girls; however, that is just the start of his extremely lucrative career. His current roster includes Annie Lenox, Steven Tyler, Carrie Underwood, and others. He is partnered with Jennifer Lopez’ and Marc Anthony.

His company, 19 Entertainment, is responsible for the signing of many artists (including Amy Winehouse, among others) since its inception in 1985. It is also responsible for American Idol. He is a jack of all trades, with his management ventures ranging from music, to fashion, to sports, all over Europe and the United States.

Simon Fuller’s claim to fame – the Spice Girls. He was, in my opinion, a pioneer in artist-brand partnerships. He garnered over 10 partnerships with major brands for the Spice Girls, and I have no doubt in my mind that this was a huge factor in their worldwide success. After all, “Wannabe” isn’t exactly one of the 7 musical wonders of the world.

Brian Epstein, often referred to by Paul McCartney as “the 5th Beatle,” was the manager of the Beatles until his death in 1967. He is considered the primary reason for the Beatles’ early successes and subsequent superstardom. Although he managed a handful of other bands, he is obviously most well-known because of his representation of the Beatles. He is a prime example of a manager that grows along with their artist; Epstein had no managerial experience when he partnered up with the Beatles, yet he refined their image and provided financial support when they were first becoming popular.

Epstein started out as a columnist in a music magazine, and this was how he came into contact with the Beatles. He had read an article in another magazine and then had a customer ask about their single, “My Bonnie,” and this sparked his interest. He then set up several subsequent meetings and eventually signed on as their manager. He refined their stage presence, mandating that they wear suits and not smoke or swear on stage (which John Lennon was not too fond of,) and this, I believe, was a small but very important factor in their early success.

Most importantly, there is one reason I consider Brian Epstein a “super manager” – in his management contract with the Beatles, he received 25% of their gross income – 10% higher than the industry standard.

Bands like the Beatles and the Who invaded the US 50 years ago; are we in the beginning of a second “invasion” right now? I hope so. Artists like Amy Winehouse and Duffy started paving the way 5 or 6 years ago by becoming chart-toppers in America, and after Adele’s recent sweep of the Grammys, it is safe to say that British music is making a comeback in America. One artist that I think everyone should check out and watch out for is Ellie Goulding. She is a singer/songwriter whose first album dropped back in 2010 and is finally getting noticed in America. Her second album is due out early this year, and she has been collaborating with artists like Mika and Skrillex. You can see her opening up on tour for Katy Perry in the coming months as well.