It seems that every year a new music festival is born somewhere in the world.

Two weeks ago someone told me about a new one that will be added to the varied offer of existing events in Valencia Community. The festival is called Music Beside Comedians (MBC Fest) that will take place in Puerto de Sagunto (Valencia) on April 3-4, 2015. 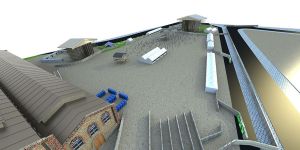 In its first year the festival is intended to attract between 12,000 and 15,000 attendees proposing an ambitious project, where contemporary music is merged with the performing arts with circus, dance and humor shows. Although the line up for this first edition will be announced in the following weeks, the organizers inform that this year they are focussing mainly in Spanish bands, with the aim that in the next few years the bill will consist of 50% of  both national and international acts.

The location chosen for this first edition is the esplanade in-between some of the industrial units that are in area of Sagunt, an emblematic place of the extinct Foundation for the Performing Arts although at lest for now that place is blocked due to some litigations.

The promoter of this festival (and main inversor) is Manuel Broseta, prominent politician and number two in the lists of the next municipal elections.

Following the major festival’s accommodation trends they offer two types of fully assembled tents, so you enjoy the comforts of a hotel in the heart of the festival. Who said going camping was uncomfortable, dirty, cold and not fun? Not anymore: The Company Glamping is the responsible in this festival to offer this possibility.

Gampling is a new concept which is to give well sleep to people. This new idea was born first in England and then these young spanish entrepreneurs brought to Spain a couple of years ago.