I recently helped Sounds Australia put on this event. It was a massive success. The bands were on point, the sausages were sizzling and the beer was warm. A perfect Sunday in London.

Friday on my Mind

After appearances at Liverpool’s Sound City and at Brighton’s Great Escape Festival, Sounds Australia brought their Aussie BBQ showcase to London on Sunday.

Held across two stages at the reputable Hoxton Square Bar & Kitchen venue, the Aussie BBQ 2014 played host to an incredible 21 acts over an amazing – albeit somewhat exhausting – 11 hours.

The day was kicked off in fine style by double drum-kitted Melbourne rockers Money For Rope, before the captivating Kate Miller-Heidke took to the stage. On the back of a strong and distinguished career back home, Miller-Heidke has come to the UK to promote her first locally released single, ‘Yours Was the Body,’ and it shouldn’t take her long to conquer the British public of she continues to produce spellbinding performances like Sunday’s. 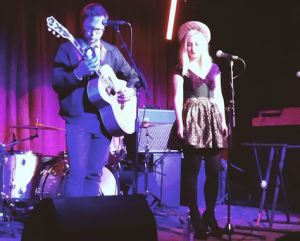 Another highlight from the afternoon shift came in the form of Brisbane five-piece The John Steel Singers, whose half…