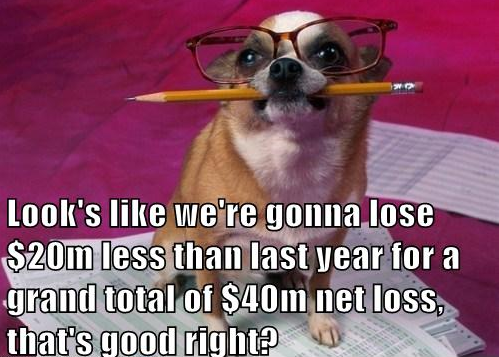 A confidential industry source has leaked information to techcrunch.com writer Eric Eldon that Spotify’s financial figures in 2012 are suggesting that things may be looking brighter than expected for the company in the future – As covered in a recent post of mine, the service reported a loss of $60 million in 2011 from total revenue of $244 million due to large operating costs and other expenditures.  The source has claimed that in just the first six months of 2012, the streaming service made $200 million in total revenue, with a projected end of the year revenue to clock in around $500 million, if current trends continue.  Due to high licensing fees and other operating costs, the source suggested the company will likely post a loss of $40 million in 2012 at the end of the year.

Losing $20 million less than the previous year sounds good, right?  Prehaps to you and me, it’s not great news, however the company has received another round of funding to fuel ongoing growth and to cover losses, amounting to more than $100 million.  The question it comes down to is whether or not the service can obtain enough paying users to make the service a sustainable, healthy company for the long term.  Some argue that the future release of the browser-based version of the service could increase it’s user base, however growing competition from ambitious and expanding companies like Deezer, Rdio and WiMP make the glass look half empty.

Do you think Spotify has what it takes to post a positive net income by 2017?