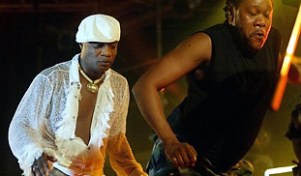 As the concept for world music was adopted in the 80´s, so was Soukus known for contemporary congolese music. Artfully produced, indefatigably upbeat music, genial voices and mesmerizing guitars, is a great description made by National Geographic. In the 1960´s the Congolese’s music market was dominated by three songs even dough many concerts where going on the streets. Since this music is directly related to dancing, some performances extended their improvisations up to 20 minutes.

The evolution of this music was evident as soon as it touched Europe, specifically Paris. Bands had been moving out of the Congo since the 70´s and expanded internationally to others countries  of Africa and Europe. Since then, musicians started living more out of recording sessions and their own albums. Before the beggining of the new millennium formal bands for soukus music where forming and playing in Europe. Some of these bands are 4 Étoiles, Loketo and Soukous Stars, Sam Mangwana, Mose Fan Fan, and Samba Mapangala. As albums where produced with a much more modern and less spontaneous way, they found it hard to sell that music back in their countries of origin. Some of them have found the way to gain fans around the world even dough not necessarily categorised as world music.